A1: Realized niche
A2: True climate

B1: Reproductive potential
B2: Population dynamics
B3: Evolutionary adaptation 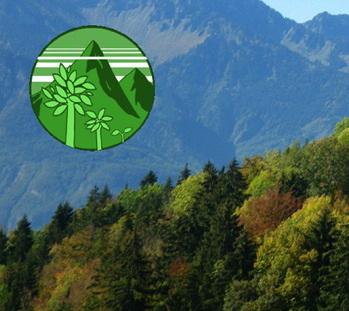 The number one question in ecology is why certain organisms occur where they do, and what the traits are which make them successful. This project aims at arriving at a mechanistic rather than a correlative explanation of the climatic limits of major European broad leaved tree taxa. It will focus on and explore their temperature-related limits and aims at reviving Europe's traditional strength in physiology based ecology by training a group of young scientists to answer such questions. The project adopts a three-step approach:
(1) Assess the current extreme postions of tree taxa along thermal gradients, using existing data bases and site visits (data mining, biogeography). (2) Associate those patterns with bioclimatic information, both available and newly acquired (climatology). (3) Empirically test hypotheses of causes of growth limitation and stress survival, both in the field and in the laboratory (ecophysiology).

A1 Realized niche and macro-climate (GIS, elevation vs. latitude)

The ranking of major European deciduous tree taxa with respect to their cold climate limit is consistent across the two test regions in the Alps and in S-Scandinavia. We thus can conclude, that the taxa examined have been tracking regional climate and arrived at their thermal niche envelope. This study also provides support for the concept of the species range–environment equilibrium. Notably, we did not find stronger deviation in filling thermal niches at the latitudinal limits as compared to the elevational limits, although the former involve a species to cover a greater geographical distance. Thermal equilibrium seems thus decoupled from potential geographic non-equilibrium. This is a key observation for all forthcoming data analysis and interpretation and provides support for other studies using Ecological Niche Models. Hence, we gave this part priority (paper by Randin et al.).

Climate data expressed as seasonal mean temperature at the leading edge differ by species, but not by region. We are able to link next weather station data with our onsite 2-m air temperature readings linearly. Absolute minimum temperatures at tree top are ca. 2 K lower than air temperature recorded at 2 m above ground. Presumably decisive extremes are rare, but we recorded temperatures below -20 °C. These data are currently used to hindcast long term occurrences/probabilities of absolute minima in situ. The results are presented in Kollas et al.

B1 Reproductive potential (seeds and viability)

Seeds collected from the leading cold edge of current broad-leaved tree species occurrence do not show any indication of reduced quality. Germination hardly differed between provenances from low and high elevation. Three species germinated poorly irrespective of provenance (origin) and treatment (Tilia, Quercus, Ilex). In the case of Quercus this was related to fungi. We conclude that seed properties offer no explanation for the current tree species limit (paper published by Kollas et al. 2012).

These results contradict the hypothesis of reduced quality of seeds in trees at their high-elevation range limits and support the findings of the study on population dynamics in the same regions (section B.2).

Across regions, seedlings and saplings were on average found at elevations 73 m higher than adult trees.

Nursery grown tree seedlings performed very well at ALL transplant gardens. In fact, they did so well and grew so fast, that we had considered terminating the trial in mid 2011, but then felt the benefit of completing the 2011 season was greater than the drawback of losing root information. There was a clear reduction of growth with elevation, a shift in phenology (paper by Vitasse et al.), and a dominance of local environmental conditions over genetic properties (small provenance effects), suggesting only minor ecotypic differentiation across the elevational gradient of sampled seed mother trees. The transplant gardens that we established on recommendation by the ERC peers above the current tree limit are still intact, and will be further observed to obtain longer performance data.

By reciprocally growing tree seedlings from low and high elevation provenances in common gardens at different elevations, we were aiming to reveal evolutionary adaptation of different species to cold growth conditions and disentangle genetic from phenotypic plasticity in these trees. For this experiment we used seedlings of 7 common broad-leaved, deciduous tree species raised from seeds that were collected at lower elevations and at the upper edge of their respective distribution ranges in two regions of the Swiss Alps (near Martigny, i.e. ‘western provenances’ and in the area of Chur, i.e. ‘eastern provenances’). The gardens with over 4500 seedlings were established in spring 2010 at four elevations in the western Alps and eastern Alps, respectively, and covered an elevation gradient form 430 m asl. to 1700 m asl. In each garden seedlings from high and low populations from both regions were grown for two consecutive seasons. To avoid site-specific effects apart from temperature, all seedlings were grown in pots with standardized soil and watered throughout summer. Results are summerized in Vitasse et al.

Freezing resistance is species specific, and the tolerance to extremely low temperatures during the critical late winter to early spring period reflects the elevational ranking of species and also matches the absolute minima of temperatures obtained from weather stations (past +30 years) when scaled to site elevation. During budbreak all species dramatically lose their frost resistance and thereafter the resistance to freezing stress is very similar between species. Therefore the timing of budbreak is decisive for freezing resistance in spring. We developed routines that permit scanning large amounts of samples for freezing resistance by applying a close to nature freezing temperature progress, with minimum delay to field collection of samples. We also developed laboratory (histology) and statistical tools (LT 50) to process results.

The right timing of bud break and therefore survival of freezing stress during bud break, is one key driver of broadleaved tree species distribution. Results are published in Lenz et al.

From the dendrology work, we can state that there is no indication of a severe growth limitation (inhibition of xylogenesis) of trees at their species specific elevational limit over the past ca. 50 years, although tree rings are sometimes narrower at higher elevation. However, an increase of the frequency of negative pointer years with increasing elevation hints at impacts by freezing events. In addition, critical temperatures for root growth under controlled conditions suggest – in line with the dendrology work – that there is no direct growth limitation by in situ temperatures during the growing season of broadleaved tree species at their current upper elevational limit. For results see Lenz et al., Schenker et al. Taken together with results from freezing trials, it seems that frost during the dehardening and flushing in spring is the most likely cause for upper distribution limits of the broadleaved tree species examined. In agreement with the results of the phenological assessments in growth chambers, Fagus sylvatica seems to be the only species which could potentially be growth limited. For this species, evolutionary pressure is thus expected to select early flushing individuals at higher elevations to maximise the use of the growing season in spite of higher risks of being damaged by frost, which is also in line with our results found in the reciprocal transplant experiment. Above- and belowground temperature manipulation experiments, as well as in situ dendrological works show that broadleaved tree species are not limited by their ability to perform structural growth at the current elevational distribution limit, with the exception of European beech. The increasing frequency of negative event years with elevation hints towards a limitation by frost damage to meristems. See synthesis in Körner et al. 2016.